Aventurine is a fine green stone of the Quartz variety. It has inclusions that make it different from other green stones. By adding certain compositions, its color can drift on blue, red/brown or yellow. Its virtues in lithotherapy are very appreciated, in particular for its ocular and cutaneous side.

Aventurine from the Italian "per aventura" means "by chance". This term was given in 1700 when an Italian glassmaker unintentionally dropped copper filings into molten glass. From this mixture, a new crystal was created called aventurine glass, which later gave its name to the Aventurine stone, because of their strong resemblance. Note that Aventurine was known as Prase, before it was officially renamed Aventurine.

Aventurine has a very exciting history, its first documented goes back more than 4,000 years ago in China. It was already very popular there because of its association with royalty and the deity Guanyin Pusa representing mercy, love and health; giving it the name of the "Yù imperial stone". Chinese people believed that they could receive vitality and well-being from this stone, either by drinking an elixir made from Aventurine or by wearing a protective talisman against the forces of evil.

The Etruscans had like the Chinese given a divine reason to Aventurine and linked the stone to their goddess of childbirth Thalna.

About 2000 years ago, the Incas used Aventurine as a good luck charm for fortune and wealth.

The Tibetans used it for sculptures, especially for the eyes of statues and for lithotherapy. It was used as a talisman to improve perception and avoid optical loss.

The Celts associated this stone Aventurine with the symbol of spirituality and knowledge.

Finally, during the 19th century, the Russians used Aventurine as a decorative stone for the design of vases, artistic objects and jewelry. 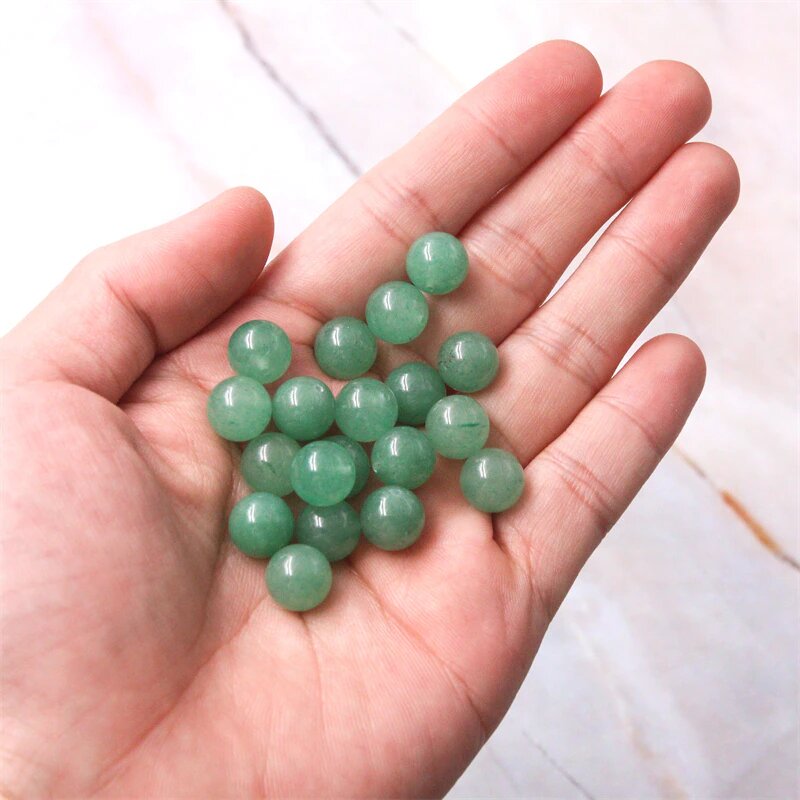 Origin and composition of Aventurine

Aventurine is a beautiful stone of light green color with fine inclusions of Fuschite. Its main composition remains silicon dioxide (SiO2). It has a density that varies between 2.63 and 2.69 depending on the type of Aventurine. It is a type of quartz, which can have bands and spots of color, which differentiates it from Jade or Agate.

Aventurine is formed inside magmatic rocks (pegmatites) and/or hydrothermal veins.

The color and stains in Aventurine vary from variety to variety, making the stone vivid and brilliant. The most common inclusions are mica and hematite which create its red/brown colors. Aventurine's green hue is due to the presence of fuchsite. While dumortierite gives blue varieties of Aventurine, but they are very rare to find.

One can find Aventurine in Europe and the United States, but the main deposits are in India, China, Brazil and Russia.

Aventurine's hardness can range from 6.5 to 7 on the Mohs scale, depending on the variety of Aventurine.

Virtues and Meaning of Aventurine

Aventurine is a stone of anchorage and balance. It is considered an anti-stress stone and can neutralize all negativities.

From a physical point of view, Aventurine would be able to soothe skin problems such as acne, eczema or allergies, soften the skin and regulate it. Depending on how it is used, its effects are more or less effective; for example, drank as a Elixir, put in direct contact with the skin, drank in a glass of water with the stone.

Aventurine stone is said to have properties such as: promoting growth, relieving heart, liver and eye problems, allowing better rest and regeneration.

From a spiritual point of view, Aventurine has natural properties and makes it the perfect mineral for anyone wishing to embark on a journey of self-discovery. When combined with Pink Quartz, the two bring openness of heart and full awareness in perfect synergy. It is a stone that brings happiness and joy. Aventurine brings compassion, encourages the feeling of love for oneself and others, increases tolerance to help accept one's own faults but also those of the world around us.

Aventurine can have different virtues due to its inclusions and colors:

- For red/brown Aventurine, it helps to move forward and pushes to gain self-confidence. Its related astrological signs are Cancer and Sagittarius.

- For the blue Aventurine, it allows a better oral expression, reduces the anger, a perfect asset to manage the conflicts. Associated with the signs of Sagittarius, Aquarius and Virgo.

- For yellow Aventurine, it stimulates inner energy and regulates your appetite. This stone is linked to the astrological sign of Aries.

Note that lithotherapy does not allow to replace a medical treatment nor a medical expertise.

Meaning of the Aventurine

Aventurine is often considered a symbol of openness, good luck and fortune for those who wear it.

Aventurine also has cleansing qualities that help balance all your chakras, giving you clarity of mind while improving your decision-making abilities in complex situations. From then on, you will be able to feel liberated, to think and express yourself without any heavy burden on your shoulders

Nevertheless, it remains favorable to the heart chakra because of its virtues brought to the heart, liver and its emotional benefits such as love, confidence or courage. Regarding the frontal chakra, Aventurine balances energies and allows an open mind.

The astrological signs associated with Aventurine are Cancer, Taurus, Libra and Aries. Aventurine is the stone of the birth month of August. It is also the stone for 39 years of marriage.

To maintain correctly your stones of Aventurine, it is advisable to purify and clean them with distilled salt water for 2 to 3 hours.

Once cleaned, recharge your Aventurine with sunlight or with a quartz cluster.