Azurite and Chrysocolla are both mineral species that can be found in the same deposit and can occur together as a mineral called Azurite-Chrysocolla. Azurite is a dark blue copper carbonate mineral, and Chrysocolla is a hydrous copper silicate mineral that can vary in color from blue to green to brown. Azurite-Chrysocolla forms as a result of weathering and oxidation of copper ore deposits, and it usually occurs as a massive, soft, earthy material. It has a unique combination of Azurite blue and Chrysocolla green which can also be found in various forms, cabochons, beads, rough and polished stones. This stone is often used as an ornamental stone and in jewelry.

Azurite comes from the word "lazhward" which means "blue" in Persian, in reference to its azure color. Before being called Azurite, the stone has known through time, several denominations and beliefs according to peoples and civilizations.

Azurite was called the ancient Greek "kuanos" meaning "cyan". It was imported from Armenia or the island of Cyprus. Of this, ann alchemist named Theophrastus referred to the stone as "Gemstone from Armenia" or "Lapis Armenis" in his book "Treatise on Gemstones".

During the Middle Ages, France called it "Chessylite", referring to the town where Azurite was found, Chessy-les-Mines. It was used to color manuscripts.

In 1824, the name became "Azurite", named by the mineralogist François Sulpice Beudant who described Azurite in his book "Traité élémentaire de minéralogie". Nowadays, the IMA (International Mineralogical Association) accepts and grants the name "Azurite" to the stone.

In ancient Egypt, Azurite was crushed into powder to make pigments and used for its beliefs. It was believed that drawing a third eye on the forehead with this powder would enhance one's powers.

Among the Mayans, Azurite is a stone of connection with the invisible world.

Finally, in Atlantis, it is considered a regenerative and soothing stone.

Azurite is used today for its healing benefits and especially for jewelry.

The History of Chrysocolla

The name of Chrysocolla or "golden glue" comes from the Greek "chrysos" which means "gold" and "kola" which means "glue". Its name is given by Theophrastus, a philosopher in the year 315 BC in his work "Treatise on stones". Chrysocolla was once used as "glue" in the soldering of gold.

In the Middle Ages, the Chrysocolla stone was used for its medicinal properties such as accelerating healing. It is said that it was worn by the famous Cleopatra due to its soothing properties, calming her anger.

During the Renaissance, the pigments of Chrysocolla were used for painting (frescoes or paintings) or for the illustration of manuscripts/parchments.

From the 19th century onwards, Chrysocolla was used as ornaments for artistic objects or for jewelry, especially for gold jewelry. Chrysocolla is said to be the symbol of water for believers and to represent the close connection with nature.

Chrysocolla is still used in jewelry. Origin and composition of Azurite Chrysocolla

The Origin of Azurite

Azurite is composed of hydrated copper carbonate, chemical formula Cu3(CO3)2(OH)2. Its density is 3.8.

This beautiful stone offers deep blue colors of the azure or night type. It can be translucent, which gives a vitreous luster.

Azurite is formed by carbonated water that mixes with copper ores. From this mixture, copper deposits are transported into an oxidation zone combining carbonate sedimentary rocks and waters rich in copper sulfates.

Its formation is identical to Malachite, so it is recurrent to find Malachite or Chrysocolla alongside Azurite.

It is possible to find Azurite in Arizona, Morocco, Mexico or Russia.

Its hardness is 3.5 to 4 on the Mohs scale, which makes Azurite a very fragile stone.

The Origin of Chrysocolla

Chrysocolla is a member of the cyclosilicate family, a variety of copper hydrosilicate with the chemical formula (Cu,Al)2H2Si2O5(OH)4-nH2O. It is composed of different elements including oxygen, silica, copper, aluminum and hydrogen. Its density is 2.2.

The formation of Chrysocolla is due to the water concentrated in silica which flows on the veins of copper, that is to say by the alteration of copper deposit. It is possible to find Chrysocolla in different forms (crusts, botryoids, stalactites or stalagmites). Moreover, some traces of Chrysocolla can be found in other minerals such as Azurite, Malachite, Quartz, Hematite and other copper-based minerals.

Due to its properties, Chrysocolla is a fragile stone, especially because of its low water content and sensitivity to high temperatures. Moreover, this stone is not easy to work with for jewelers, as it is not hard enough. Like Malachite, natural Azurite is very porous.

It is also possible to see varieties of Chrysocolla;

- The "Eilat stone" is a mixture of Chrysocolla, Azurite, Malachite and Turquoise. It was found in the ancient copper mines of King Solomon.

- Simply combined with Quartz, the stone becomes a "Chrysocolla Quartz".

- Finally Azulite which is a mixture of Malachite, Azurite, Dioptase, and Chysocolla.

Chrysocolla can be found all over the world. However, the main deposits are in Australia, Germany, the United States, Russia, England, Congo-Kinshasa and France.

The hardness of Chrysocolla varies between 2 and 4 on the Mohs scale. 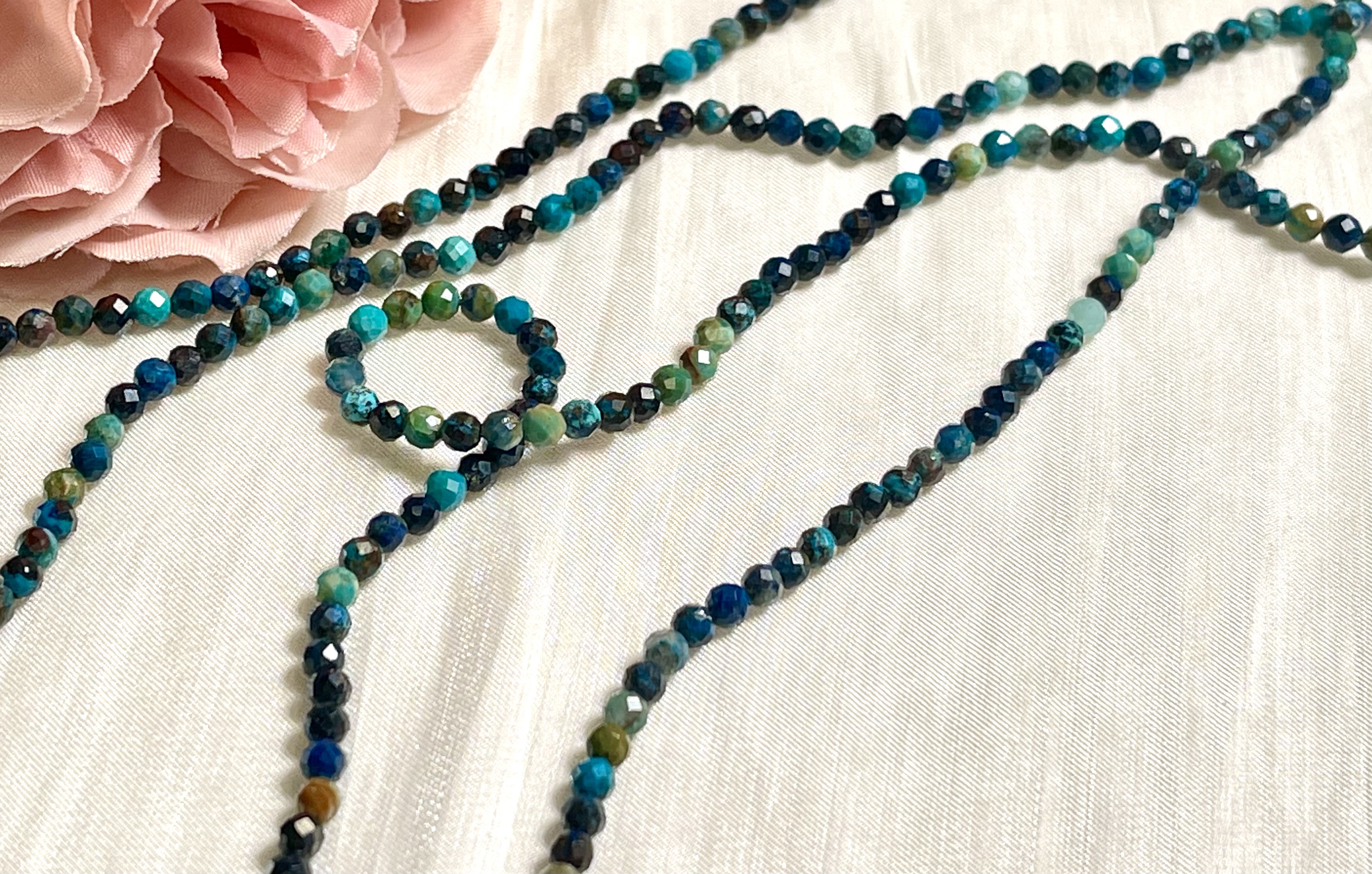 Virtues and Meaning of Azurite Chrysocolla

Azurite-Chrysocolla is also known for its metaphysical properties and is believed to have a calming and soothing energy, promoting inner balance and tranquility. It is also a powerful stone for communication, allowing clearer and more effective communication in all areas of life.

Below you will find the virtues and significance of the stones Azurite and Chrysocolla.

Azurite is generally considered a stone of health.

It brings impressive virtues on the physical level. On the one hand, it improves mental capacities and knowledge. The stone of Azurite improves sensory perceptions, which makes the user more responsive and focused.

On the other hand, it is considered a health stone for its anti-inflammatory, anti-microbial and regenerative properties.

Azurite is quite simply beneficial on the spiritual side. First of all, it strengthens the spiritual bond by getting rid of all the hindrances on the path of its user. Moreover, it favors communication with the invisible world.

Finally, this stone helps to open the mind, allows the human being to find an anchorage and a rebalancing of his physical and psychological state.

Chrysocolla is considered a stone of creativity.

From a physical point of view, the Chrysocolla stone helps with problems related to the throat as for breathing, oral communication and even for people suffering from the speech disorder, stuttering.

In addition to that, it is very beneficial for sportsmen thanks to its soothing and fortifying virtues. Chrysocolla fluidifies the blood circulation, strengthens the human body (muscles/bones) and relieves against the backache like cramps. It is also effective in relieving menstrual pain.

From a psychic point of view, the Chrysocolla stone can block all negative influences (jealousy, anxiety...) to allow its user to find inner peace.

It facilitates communication while strengthening friendship, understanding and relationships.

The natural stones of Azurite and Chrysocolla are a true source of tranquility and healing. It will help you heal your physical and emotional pain.

Azurite is associated with the 3rd eye chakra, as it facilitates grounding and spiritual connection. The coronal chakra is also linked to Azurite for its harmonizing properties between body and mind.

The stone correlates with the astrological signs of Sagittarius, Capricorn and Libra. Azurite is perfect for 56 year olds.

Chrysocolla is linked to the astrological signs of Libra, Gemini and Sagittarius. It is also the stone for the 26 years of marriage.

There are several methods for cleaning and purifying Azurite-Chrysocolla :

There are several methods to recharge Azurite-Chrysocolla :