Diopside: purification, history, composition, benefits and origin of the stone

The history of the diopside stone

Its name comes from the Greek with "Di" (two) and "opsis" (face) which means two faces to emphasize its two aspects. There is a variety of the stone the star diopside which comes from India, its name refers to the four rays that compose it. It also exists in black due to its coloring.

The diopside stone was discovered very recently and appeared for the first time in northern Siberia and more precisely in Yakouti. It was developed on the Russian market in 1989 following the fall of the Berlin Wall.

Diopside is still little known despite the fact that its deposits are becoming more and more numerous. This stone is more fragile than emerald and can be easily scratched if not taken care of. With its generally accessible price, it remains very popular with jewelers to make pendants or bracelets containing multiple virtues in lithotherapy. It can be found in several round forms or in other variants that are offered at higher prices.

According to legend, it fell from the tree of life, which symbolizes the development of life on earth.

Diopside is found in metamorphic or magmatic rocks and its green color comes from chemical elements such as calcium silicate, iron and chromium.

The light green variant of diopside is called Tashmarin. This stone is found in the Uyghur region of Xinjiang in western China.

Its color is lighter than diopside because of its low chromium content. Violet is another variant of the stone that is between blue and purple that comes from Saint-Marcel in the Val d'Aosta in Italy.

Its hardness is between 5 and 6. 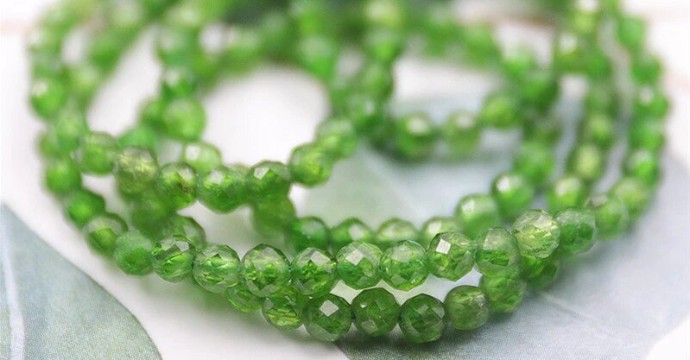 The stone of diopside allows on the physical level to prevent the diseases and rebalances the blood system by regulating the acidity. It also regulates the cholesterol level and also helps to recalcify the bones, but also limits spasms or cramps.

As far as the emotional level is concerned, it allows to soothe the traumas that come from childhood since it has properties that allow to take a step back and to let go by refocusing on the present moments. It is very useful for meditation as it helps to free the mind.

The stone also promotes compassion and allows to evacuate the stress accumulated during the day and to make better decisions since the stone helps to have clearer visions. It is also recommended for young children for which it would help them develop stronger and healthier teeth.

There are three methods to purify stones when they come into your hands and exhaust their energies:

-Purification with distilled or demineralized water;

-By burying in the ground.

If you practice meditation regularly, it may be helpful to use the fumigation recommended for light purification and energy cleansing.