EMERALD: ORIGIN, HISTORY, COMPOSITION, VIRTUES AND PURIFICATION OF THE STONE

Emerald is a member of the family of four precious stones such as Diamond, Sapphire and Ruby.

Emeralds are green to bluish-green varieties of beryl, a mineral species that includes Aquamarine and other Beryls. The green color is given by the presence of chromium in its structure. Beryls with an intense green color are normally called Emerald by gemologists and laboratories. However, when Beryl has a "too light" green color, the gem will not be considered an Emerald. Even within this group, there are different opinions on what is considered "too light".

The word Emerald comes from old French "Esmeralde", derived from the Latin"smaragdus".

Since ancient times, Emerald has soothed souls and inspired imaginations with its lush green hue. The color green has intrigued the imagination and minds of people since ancient times. Pliny the Elder described Emerald in his Natural History as "nothing greens greener". He also described use of Emerald by early lapidaries as a way to restore their vision by looking at it. Even today, the color green is associated with relief from eye strain and stress reduction.

Legend also has it that the Emerald was one of four precious stones given by God to King Solomon. These four stones are said to have given the king power over all creation.

Emeralds were part of the booty when the Spanish explorers of the 16th century invaded the New World (what is now Colombia). The value of emeralds was recognized by European and Asian royalty through Spanish trade. Indeed, the Spaniards valued gold and silver much more than precious stones, so they exchanged emeralds for precious metals.

Although there are other green colored gemstones (Peridot, Tsavorite (green garnet), Tourmaline), none could be compared to the lush green of Emerald. Hence the attribution of its name as a nickname to many famous places such as the Emerald Isle for Ireland, the Emerald City for Washington... 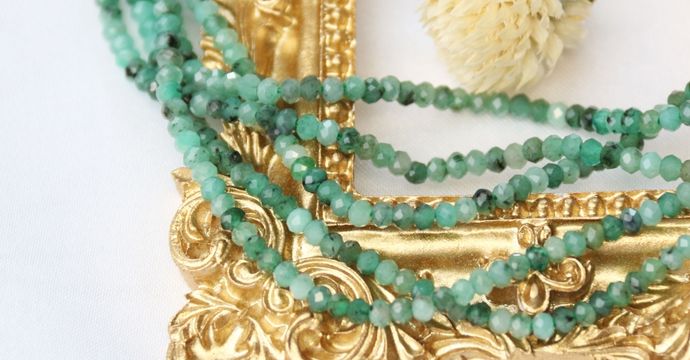 Origin and Composition of Emerald

Emerald is the most famous variety of Beryl, with Beryl being part of Silicates group.

Beryllium, aluminum, silicon and oxygen are the essential elements for the formation of beryl. Beryl can be found in metamorphic rocks or in cracks in granitic rocks. It will be the presence of chromium in the environment of formation that will bring the green color to the beryl to form the Emerald (when the color is intense enough).

Emerald can generally be found in Colombia, Madagascar, Canada, Zambia, or Brazil. Colombia remains the largest producer of Emerald.

The hardness of Emerald is between 7.5-8 on the Mohs scale

The legends conferred to the one who wore Emerald ability to foresee future when it was placed under the tongue, as well as to reveal the truth and to be protected against evil spells. In the past, Emerald was also believed to cure diseases such as cholera and malaria. Wearing an Emerald was said to reveal the truth or the truthfulness of a love oath and to make one an eloquent speaker.

In lithotherapy, on a physical level, Emerald is said to help relieve eye strain and cataracts, and is recommended for people with epilepsy

It also helps to strengthen the immune system by fighting certain diseases such as flu, otitis or sinusitis, and has positive effects on the cardiovascular system.

On the psychic level, Emerald is a stone of wisdom and patience. Emerald strengthens friendship and love relationships, encouraging loyalty and sincerity. It brings inner peace and repels negative energies.

When your Emerald needs to be purified and recharged. In order to clean it, you can immerse it in demineralized water for a few hours, then wipe with a soft cloth.

You can then let it recharge under the sunlight for a few hours.

Emerald is known as the birthstone of the month of May, symbolizing eternal spring. Often associated with rebirth, fertility, wisdom or love.