Fluorite: composition, origin, virtues, history and purification of the stone

The history of fluorite

Fluorite stone is one of the most colorful crystals in existence. It reflects all colors, which makes it a very attractive fine stone to look at. Its mystical properties have been sought after for centuries and its healing effects are well known in many fields of interest such as lithotherapy and divination. In recent decades, it has become a very popular material. In ancient times, people nicknamed this stone "the third eye" because they believed that by contemplating its beauty, one could gain wisdom by deciphering the hidden meanings of each combination of colors that make up the design of both sides (face and back) of each crystal - depending on whether you hold them upright or face them towards the body! With their unique variety of shapes, sizes, colors and compositions, these spectacular stones can also be used as ornamental vases. Murrhins are one example: individuals carved pieces out of solid natural crystals that were then used as decorations for objects such as flower pots or fireplaces in medieval times. 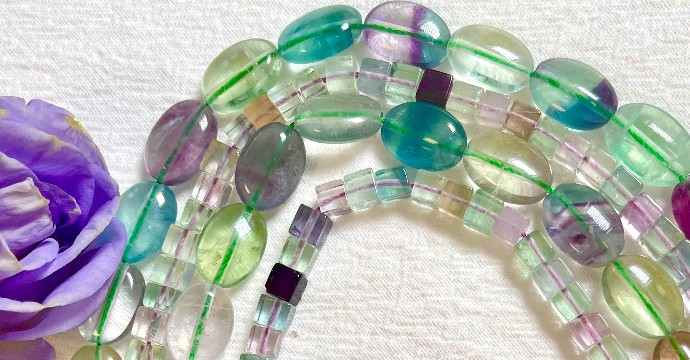 Fluorite is a mineral containing a lot of calcium fluoride. It also contains traces of other minerals such as iron, magnesium, cerium and chlorine. Fluorite forms from veins or deposits at low temperatures in granite layers or in metamorphic rocks composed of granites. When heated, it breaks down into a white powder that can be dissolved by sulfuric acid to produce hydrogen fluoride if you want to make it a toxic and corrosive gas for various purposes, such as welding metals, etc. If we say more about fluorite stone, we notice that when it is pure, it is colorless, but when mixed with chromogenic elements and trace ions, its color spectrum changes accordingly.

Fluorite is found in many parts of the world, including Europe (in France in Haute-Vienne, Spain, Germany), South Africa and China.

Fluorite is a stone of light and clarity, and is recommended for those who want to free themselves from mental blockages they may feel. It has been used in meditation as it helps to calm negative emotions and bring peace. Fluorite can help restore balance after being manipulated by an outside force or after drifting through life with confusion due to a lack of focus. The benefits of this stone are unparalleled as it helps anyone who struggles with obstructions in their mind or intrusions in their thoughts that cause stress and anxiety in everyday situations. Using fluorite eases anger while helping to relieve sadness caused by loss or grief.

Fluorite helps free you from psychic blockages, meaning you are able to think, see, express yourself and act freely! It gives you the confidence and assurance to follow all the information your mind is perceiving at any given moment - even when it is less visible or more singular. Fluorite helps to explore other spaces within yourself and the Universe.

How do I cleanse stones?