The use of the hawk's eye stone has been used throughout time and civilizations as a stone of protection and spiritual evolution. Early humans attributed great importance to this stone because of its divine connection to their world, attributing spiritual power to it. Very little is known about this crystal - the lack of references or documentation is probably due to its rarity.
In ancient Egypt, the eye was considered to be associated with Horus, who was one of the many gods of ancient Egypt and was considered a protector of kings during the period of history when the pharaohs ruled Egypt (Ancient Egypt). The eye stone was also associated with Isis, which may have had some influence on why people considered it to be spiritually rather than physically related, despite its heavenly origins.
The word "falcon" means hawk in French - where does it come from? In France, they are called hawk eyes, which means eyes like a hawk's.

The hawk's eye stone is composed of quartzite. Its hardness is about 7 Moh's. It is found in granitic alkalis, where it forms naturally and resembles an eagle's eye (but less beautiful!). Microcrystalline quartzites are similar to our hawkstone but contain asbestos - which gives them their emerald colour - when they were formed by exposure to oxygen due to its chemical transformation and fibres becoming permanently trapped inside the mineral, forming this impressive rock crystal! The best known places to find these stones are South Africa, Brazil, Australia and India. 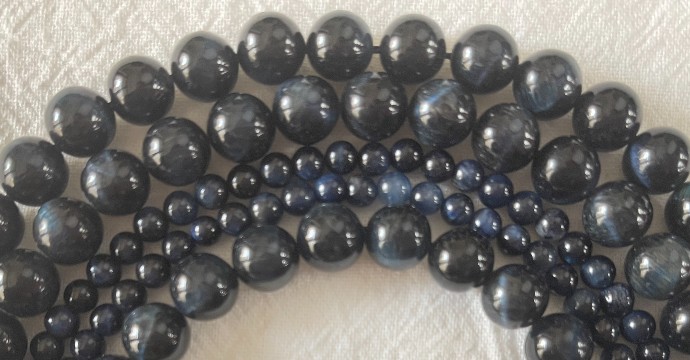 Hawk's eye stone is believed to have powerful visual benefits. It can reduce vision problems, improve eyesight and prevent eye conditions such as cataracts and conjunctivitis. Falcon stone also helps to improve eyesight and prevent migraines. In the form of an amulet worn around the neck, it will help you relax your throat muscles so that you can also breathe better! When placed on your chest, it relieves tension caused by tension in the throat area to facilitate communication between people.

The hawk's eye stone is an excellent choice for anyone who likes to work with lithotherapy. This crystal is associated with powerful properties and a high spiritual vibration, making it similar to the tiger's eye stone; however, there are also significant differences due to its intense blue colouring. The recommended use for this particular type of cobalt blue mineral would be in meditative practices or for anyone wishing to explore their thoughts.