Kyanite : History, Origin, Properties and Virtues of the Gemstone

Kyanite : History, Origin, Properties and Virtues of the Gemstone

Kyanite has been used throughout history as a gemstone and ornamental material, but what many people don't know is that there are many different types of Kyanite gemstones with all sorts of interesting properties and uses. Kyanite also has some interesting physical properties, such as phenomenal resistance to heat. Kyanite can expand depending on the heating conditions, it can expand up to twice its volume.

The name of Kyanite comes from the Greek word "kyanos" which means cyan referring to its blue color, named in 1789 by Abraham Gottlieb Werner. The mineral was first found in blue-violet masses rather than in pure crystals. In ancient Egypt, Kyanite was used to make amulets and beads. The Egyptians believed that Kyanite protected them from evil spirits and possessed mystical healing powers. The ancient Egyptians also collected small pieces of Kyanite from mines, along with stones such as hematite and malachite, because they were believed to have magical properties

Origins and composition of Kyanite

Kyanite is a fine purple to blue-green stone that forms in high temperature metamorphic rocks called nepheline syenite. Kyanite is a member of the silicate family. Kyanite can also be found in green, gray, white, yellow or orange hues, but these varieties are less common.
The chemical composition of Kyanite is Al2SiO5, identical to that of andalusite and sillimanite. Unlike the previous stones, it is often formed at high pressure and high temperature.

It can be found in opaque and translucent varieties, depending on its concentration and the amount of light it reflects. In general, Kyanite often has an uneven color and white streaks and/or spots on the inside/outside of the stone. It is often considered a fragile stone.

Kyanite deposits can be found all over the world, with the main deposits located in Brazil, India, Italy and France.

The most notable characteristic of Kyanite  is its hardness, which varies depending on the direction in which the measurement is taken. On the Mohs scale of mineral hardness, its hardness ranges from 4.5 to 5 in the longitudinal direction and from 6.5 to 7 in the perpendicular direction. Because of this property, Kyanite was also called "kyanite", from the Greek words "di" and "stenos" which mean "two" and "strength" respectively. 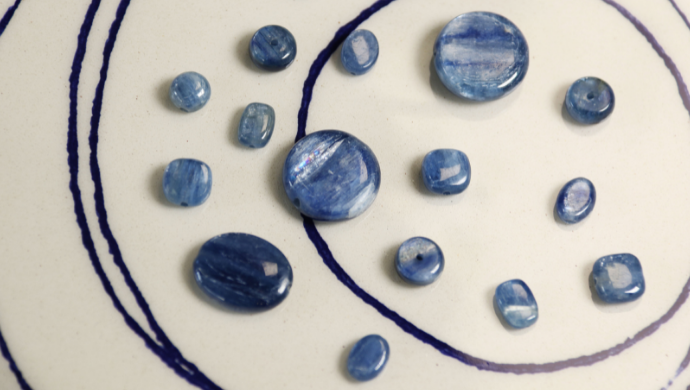 Many virtues are attributed to Kyanite. Kyanite is a stone of strength and inner peace. The use of this stone goes back to antiquity. Long ago, it was believed that Kyanite could protect people from harmful radiation. Blue Kyanite is also known as the "stone of truth" because it can heal and clear the chakras (related to the throat chakra). It is also associated with the element of air and is said to bring harmony and concord to the wearer.

In some parts of India, people use Kyanite  as a spiritual stone as it is believed to help bring inner peace to the wearer. Kyanite is also known as a stone of self-knowledge.

Kyanite is also ideal for meditation, as it brings mental clarity, inner peace and emotional stability. The stone is said to have a calming effect on people who suffer from anxiety or stress and makes them feel more at ease in their daily lives. As a result, it is said to promote good sleep quality.

In lithotherapy, Kyanite would improve hearing and communication. On the physical level, Kyanite is also known as a healing stone with antiseptic properties, promoting bone recovery. Kyanite was once thought to have healing properties because it was found near ancient Roman ruins with ceramic remains in 1770 AD

Note that lithotherapy is not a substitute for medical treatment or medical expertise.

When your Kyanite  needs to be purified and recharged. In order to clean it, you can immerse it in demineralized water for a few hours, then wipe it with a soft cloth.