Labradorite is a natural stone from the Feldspar family. Labradorite is a special stone, because it has a beautiful iridescent reflections thanks to the Schiller effect. It is known in the world and especially in the world of jewelry. But not only, its virtues in lithotherapy are even more popular; its protective and regenerating properties are the most appreciated.

The name Labradorite is given in reference to the city where the stone was found, that is to say in Canada, more precisely in the city of Labrador. The suffix "-ites" was added later, which comes from the ancient Greek and means "belonging to". This suffix means that the stone is named after a location.

First discovered in the 1770s by Moravian missionaries. They used this stone to evangelize Canadian natives, including the Inuit. Later, a geologist by the name of Foster gave it the name Labradorite in reference to its place of discovery.

Several peoples have given several meanings to the stone, starting with the Scandinavians who associated it with the aurora borealis and that its reflections came from the iridescent clouds of the aurora.

The Eskimos thought that Labradorite came from the aurora.

Finally, the Inuit believed that Labradorite was created when the Northern Lights were trapped in the rocks in the mines of Labrador. These native people also believed that when a man struck Labradorite with his spear, the shards of the stone scattered and released the aurora borealis into the sky. They used the stone as a talisman to protect themselves from curses and evil spirits.

The Romans and Greeks believed that Labradorite stone contained the souls of the ancestors, in addition to offering wisdom and clairvoyance.

In addition to this, other beliefs used Labradorite as a remedy for pain and enhanced healing.

In the 1940s, Labradorite was used as a trap for tanks. In addition, it experienced a surge in popularity and was called "rainbow moonstone" or Spectrolite. Depending on the region, the stone was associated with a particular legend and name.

In the world of jewelry Labradorite is increasingly used and some craftsmen are inspired by creations dating from antiquity to create their jewelry. Moreover, depending on the quality of the stone, the worst ones were used to decorate facades.

Origin and Composition of Labradorite

Labradorite is a member of the Feldspar family, more specifically the Feldspars plagioclase. It is composed of sodium, calcium, aluminum, sodium and oxygen, has the chemical formula (Na,Ca)(Al,Si)4O8 and has a density of about 2.68 to 2.72.

Labradorite is formed in igneous rocks in magmatic zones. It is also possible to find Labradorite in metamorphic rocks or in sedimentary rocks. Labradorite is a plutonic rock formed by the crystallization of minerals like plagioclase feldspar and pyroxene from rapidly cooling lavas. This gives Labradorite its iridescent sheen, which is called the schiller effect or more commonly labradorescence. This term is derived from the German verb "schillern" which means "to glitter" or "to shine".

The Schiller effect is a common optical phenomenon in minerals and rocks that contain layers of minerals at different densities, such as Labradorite, that reflect light in different ways to create colored reflections. This term is used to describe this effect in minerals and rocks in general, not just Labradorite.The effect is most visible when the rock is polished or jewel-cut, and can vary in intensity and color depending on the viewing angle.

The color of Labradorite is mainly grayish with blue to green highlights. Its color can vary depending on the intensity of the light that is reflected off the stone and its inclusions such as titanium, iron, chromium, sodium, copper or manganese. Titanium, copper and iron will give rather blue-green effects. Sodium, manganese, iron and chromium will give a yellow to red reflection passing by orange. Note that the more iron there is in Labradorite the more opaque the stone will be.

The main deposits of Labradorite are located in Canada, Finland, Norway, Russia, Madagascar, Mexico and the United States.

The hardness of Labradorite is 6.5 on the Mohs scale. 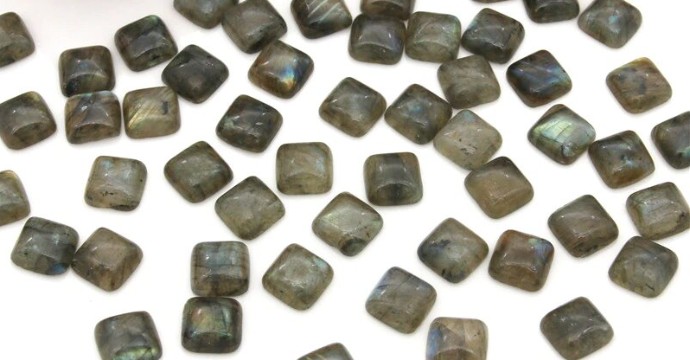 Virtues and Meaning of Labradorite

Labradorite is considered a stone of protection and comfort.

On the physical level, Labradorite is known for its properties, it has a protective effect on the body, whether on the immune system or on the digestive system. Its virtues allow to regulate the blood circulation especially at the level of arteries and organs. Moreover, Labradorite is perfect for people who are very tired and/or who are not in high spirits. It also brings a better sleep, more rest and energy. One of its main properties acts as a protective shield that revitalizes the body to make it more dynamic.

On the psychic level, Labradorite protects from any thought, negative and/or toxic emotion whether it be sadness, depression or anxiety. When coupled with meditation, its action is even more powerful and thus brings clarity, intuition and serenity. People working in the world of lithotherapy use this stone extensively as an absorber of all negativity.

The stone of Labradorite symbolizes protection and regeneration.

The natural stone of Labradorite is linked to the throat chakra which helps to release, especially from the weights that are placed on their shoulders. This chakra helps to regain self-confidence and especially brings balance between the thoughts and the mind, which allows for better clairvoyance.

Labradorite is also linked to the third eye chakra, which amplifies emotions and wisdom to bring greater clarity of mind.

The astrological signs associated with Labradorite are Sagittarius, Leo, Pisces and Gemini.

Maintenance, Purification and Recharging of Labradorite

To take care of your Labradorites, it is advisable to clean it regularly as it absorbs a lot of negative energies and to purify it in distilled water for a short period of time, or through fumigation. Finally, recharge your stone with a cluster of quartz next to it or with moonlight during an evening.