Moonstone: Benefits, purification, composition, history and meaning of the stone

The history of the moonstone

In ancient times, moonstone was considered a charm against evil and is also considered the stone of goddesses. The Romans associated this stone with Diana, goddess of the hunt and the moon. They thought that this Roman goddess of the day could be seen on this stone at night time. At that time, it was already associated with femininity, softness and intuition in women. To receive celestial clairvoyance, some men wore female costumes and put the stone in their mouth. The fact of being able to enter the skin of a woman allowed the man to reach all the extraordinary powers of this precious stone, in particular: the mystical power (clairvoyance) and the spiritual awakening.

Jean Claude Delamétherie discovered the moonstone in 1801 and its mysteries were revealed with all its components at the beginning of the 19th century. The word "lunar" comes from the Sanskrit words "chandra" and "kanta", which mean respectively moon and being loved. The two expressions together refer to someone who is loved by the moon - an allusion to its mythical origins. Its name also comes from its luminosity, as in the splendor and beauty of the moonstone (the stone itself), as well as from its name of hecatolite, which refers to Hecate, the Greek goddess of the moon who represents the transformation between life and death; she was both the deity of death but also of rebirth. In fact, there are three different Greek lunar deities: Artemis (of the hunt), Selene (of the night light) and Hecate (a goddess primarily associated with witchcraft). Together they form what we call "the lunar triad". You can find selenite named after Selene, which gave its name to another mineral whose white reflections resemble those seen on Luna."

Today, moonstones are used as cabochons or used in making necklaces; bracelet; pendant or even rings. People wear these beautiful jewelry/ornaments because they believe in the healing properties of lithotherapy, or simply due to aesthetics, because fashion is one of life's pleasures.

The main sources of moonstone are located in Sri Lanka and Armenia where Lake Sevan containing this type of stone is located, but there could be other less important deposits in the world, such as in Australia, Norway, Germany, Poland, Mexico and Brazil, etc.

The minerals that make up moonstone are feldspar orthoclase, and the other is albite. When these two minerals mix and cool, they leave an alternating sequence of layers. When light passes through these layers at different angles, it spreads out in different directions. The moonstone then produces what is called adularescence, which can be seen on both orthoclase feldspar and albite. This effect on labradorite gives a reflection that shifts on its surface when you change your perspective or angle to see it better. This phenomenon called adularescence gives the stone the appearance of a mirror containing every imaginable reflection in one place, with colors reflecting off its surface just as white labradorite does. 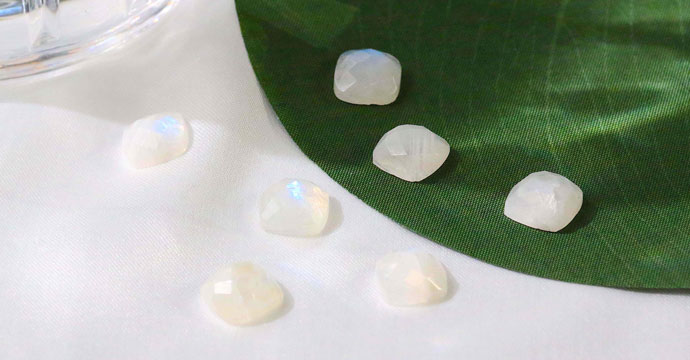 Moonstone helps you live a more relaxed and carefree life. It reduces day-to-day anxiety and makes you much more spontaneous - which promotes better social relationships at home, at school or at work. Of course, these aspects are also enhanced by the fact that it is a feminine stone - soft and delicate by nature.

Placed judiciously under a full moon or starry night, moonstone can guide you in your dreams. Intimately linked to the third eye chakra, it accompanies your spiritual awakening and helps you develop clairvoyance. In both cases, the thoughts that were bothering you dissolve into nothingness and calmness sets in. Your mind enters another type of consciousness, closer than ever to spiritual awakening! If there is one time to have this stone with you, it would be during your meditation sessions - placing it on your forehead during these times would do the trick (and even better if it's placed on the third eye). Let the moonstone guide your intuition; open its connection by strengthening it through meditative practices like yoga or mantra chanting!

Moonstone is the stone of the heart, of hope and purity. This stone helps to reduce nervousness, it also soothes nervous tension that slows down the immune system. The moonstone stimulates our imagination to bring softness and poetry to our daily acts. It brings sensitivity to social relationships while developing intuition, promoting positive changes in your life. Moonstone also helps to accept new or unexpected emotions more easily, contributing to mental and physical well-being.

How to cleanse stones?

There are three methods to purify stones when they come into your hands and their energies are depleted:

If you practice meditation regularly, it may be helpful to use the recommended fumigation for light purification and energy cleansing.