Opal: benefits, meaning, history, purification and composition of the stone

The History of opal

The history of opal is about how it has been treated throughout time. The word "opal" comes from Sanskrit, Latin and Greek to refer to a stone that changes color depending on the light in which it is viewed. It has then been used for decoration since ancient times, with jewelry made of various stones, including pearls, diamonds and sapphire, being popular examples from about 10,000 years ago to the present. With use documented as early as 4,000 BC in Africa (and believed by many), cultures across continents have also attributed significance related to weather conditions or the emergence of sudden flashes of light from behind certain rocks - but not all of these stories are true! Opals have often been associated with rainbows because they can change color while appearing white or black due to the way they reflect light waves at different angles. In India, this mythological transformation led the goddess Lakshmi to turn herself into an opal so that she could escape her many suitors who were lost in admiring her beauty; meanwhile, according to the discernible patterns in their gemstones, they are attractive enough on their own without the need for any polishing. 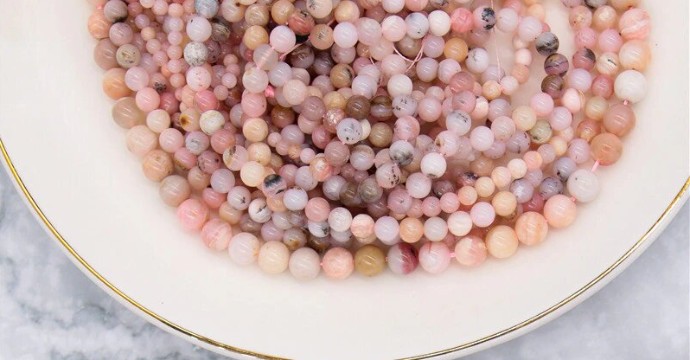 Opal is formed with alternating wet and dry periods. This happens because precipitation, via erosion, transports different materials into the underground aquifers. For example, the silica that makes up over 60% of the continental crust represents a form of silicon called silicon dioxide that forms when hydrolyzed by water containing impurities to produce an impurity-rich opal (i.e. 5-6%). Again, due to the unpredictable rainy seasons and the small amounts that are deposited over time on the top layers, giving them opaque or semi-transparent colors depending on their thickness, these opals are sometimes extracted through artisanal work, such as the famous Lightning Ridge in Australia.

It is a representation of love, passion and desire. Opal stones stimulate and revitalize our mind, ridding it of all negativity to establish balance in our psyche. They help us fight moral blocks such as sadness or boredom by encouraging wise actions or compassion - they invite us to create, improvise and live life simply. This stone brings out feelings of confidence and self-esteem and strengthens one's inner strengths with age.
Opal is ideal for treating kidney, circulation and digestion problems. It has antiseptic properties to fight infections that can occur during a diet. It also acts as a water balancer, which helps with weight loss diets.

Opal has the power to transcend spiritual pride and the constraints of the ego, encouraging inner energy rather than investing in new experiences.

There are three methods to purify stones when they come into your hands and deplete their energies: Purification with distilled or demineralized water, sea salt, or by burying in the ground. If you practice meditation regularly, it may be helpful to use the fumigation recommended for light purification and energy cleansing.