Rhodochrosite：vertus, composition, purification, history and origin of the stone

The history of rhodochrosite

Rhodochrosite is a crystal with manganese. It is found in the rhombohedral system. Its name comes from two Greek words: "rhodon" which means rose and "khroma" which means color. Discovered in Argentina during the 13th century, rhodochrosite first appeared in silver and copper mines in the territory of the Inca Empire. It was at the end of the 18th century that Kirwan & Bergmann Cronstedt recognized this stone and described it as "Manganese oxidized by air acid". The name changed over time and in 1813, JH Ludwig Hausmann renamed this stone "Rhodochrosite".

Rhodochrosite can be transparent or translucent and has an opalescent luster that ranges from pink to pale pink to light reddish yellow-brown, dotted with bands of white mineralization - sometimes called the "cat's eye effect" because of its resemblance to a lens clouded by a cataract. In the Inca culture, it symbolizes loyalty, forgiveness, sacrifice and love. Later, in the eighteenth century, the abbot Rene Just Haüy renamed the rhodochrosite: oxidized manganese carbonate. The German mineralogist Johann Friedrich Ludwig Hausmann restored the name to rhodochrosite in 1813. After that Franz Mansfeld gave the stone its present popular name: "Rosa del Inca" (Inca Rose) after his discovery of an ancient tomb filled with jewelry made from pinkish stones upon his arrival at Lima airport by boat across Lake Titicaca near Puno, Peru.

Today, we know that rhodochrosite is a national material for Argentina and one of the official stones of the state of Colorado (USA). The main deposits are found today in Argentina as well as in France, Romania, China, Bulgaria, Mexico and Gabon. 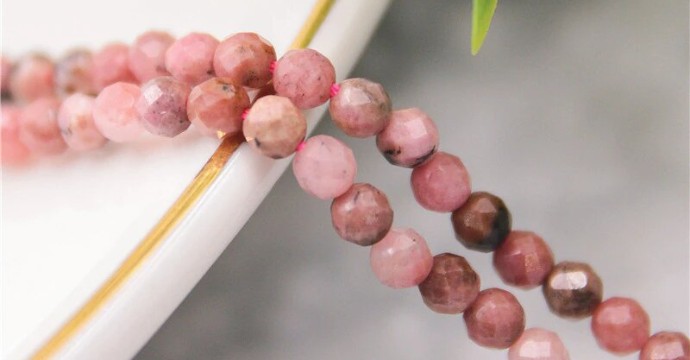 Rhodochrosite is a stone of compassion, love and consolation that helps facilitate the healing process of emotional wounds. The stone will bring out painful emotions that have been deeply buried within you. This treatment is called "emotional release" and it gently heals emotional wounds.

Rhodochrosite breaks down barriers that prevent you from moving forward by creating a renewal in your spiritual and energetic awareness. Rhodochrosite also balances the heart chakras related to one's feelings. Therefore, it combats stressors from the solar plexus as well as the regulation of feelings and emotions from the heart chakra.

Rhodochrosite is a stone that would soothe, fix and restore consciousness. It would be particularly effective against worries and mental confusion. When emotional disturbances are registered in the body, it can have a calming effect on these types of problems as well.