Rhyolite: purification, composition, virtues, origin and history of the stone

The History of rhyolite

Rhyolite is a granitic rock, which belongs to the group of plutonic rocks with a granular texture and of which quartz is one of the main components. Granite itself is composed of many minerals that make up most of the earth's crust. It has been used in construction for centuries under the name of granite. Today there are over 500 different colors, making it a fascinating material with a variety of uses, both stylistic and functional!

The process by which it is formed can be divided into two models: by crustal fusion or by mantle fusion. In both cases, an appropriate mineral assemblage gives rise to either basalts or diorites/andesites/granodiorites.

Origin and composition of Rhyolite

Rhyolite is a volcanic rock, which is the equivalent of granite. This type of magmatic rock has an appearance that ranges from light pink, to gray and sometimes blue. It can also be found in the form of obsidian, a black stone rich in quartz with chemical properties similar to those of glass. Composed mainly of silica, this rock has a low iron and magnesium content but contains some alkali (a larger amount would make it trachyte). The microlitic structure allows to observe its mineral elements like quartz while belonging to the group called "extrusive igneous" rock. A glassy rhyolite is produced when there is a rapid cooling after a contact with the surface or a zone close to a surface mainly composed of silicon dioxide SiO2. In the case of slow cooling, unique patterns appear on the stone.

Rhyolite is a stone that has various colors, it has mostly green, yellow, orange, ochre and brown as dominant colors.

Its hardness on the Mohs scale is between 5.5 and 7.

Rhyolite is a volcanic rock that comes mainly from Australia, Mexico and the USA. 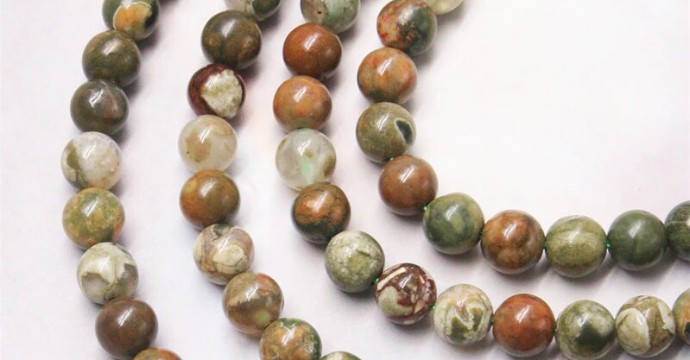 Rhyolite stone encourages tranquility, calm and positivity. It helps to visualize dreams or plans, as it facilitates the manifestation of desires and protects against doubts. Rhyolite is an ideal partner for those with plans for financial success and creativity: it will help you focus on your work while helping you achieve your goals!

Rhyolite can be used in alternative therapies to help relieve a wide range of ailments. Beneficial to the body in general, it helps stimulate or strengthen your defenses and immune system. Rhyolite also aids in the absorption of vitamins and strengthens your efforts to fight excess weight.