The history of rose quartz

Rose quartz is intimately linked to love and the heart. It was already valued in Bronze Age civilizations, such as those in the Middle East who worshipped Astrate, the goddess of fertility, war and love. These rituals continued into antiquity. Many other civilizations also used it: The Carthaginians, the Etruscans (a people who lived in what is now Italy), the Greeks, the Hebrews, the t (who lived in Israel, tribe of the Hittites/Hatti (who lived around Turkey), the Mespodsaminiyans - Mesopotamia who used the "pink stone" or "jasper", the Phoenicians (located near Lebanon). The Romans too! The rose quartz stone was supposed to have many physical benefits, especially to fight against aging. The powder of this type of quartz was used on the face to make masks and eliminate wrinkles. This type of quartz is often found at funerals: a large piece of rose quartz was traditionally given as a family heirloom in noble families to serve as a decoration, just as many other types were also given at these events. In ancient Egypt, rough pieces of the stone were taken and used for healing purposes - leading Greek philosophers like Socrates to believe that it was left by Aphrodite (Roman Venus) with her son Eros (Cupid), two deities representing love; who would have brought it down to earth so that people could spread their love more easily without causing chaos or anger! This crystal came to signify tranquility and beauty, wishing only that humans could find joy in sadness.

It consists mainly of silicon dioxide. It crystallizes between 573°C - 870°C, having a specific gravity of 2.65 which makes this stone tough but easy enough to work into jewelry pieces. Like other types of quartz crystal stones, they can be found both opaque and translucent, with different shades ranging from pink-red to light pink, depending on the amount of iron present in it.

With a hardness rating of 7 on Moh's scale, it is usually found with visible veins where the crystals have grown together forming clusters that resemble each other in shape and size and then repeat throughout an area if they are not permanently attached, giving it character.

It can be found in particular in the following countries: South Africa, Brazil, India and Madagascar. 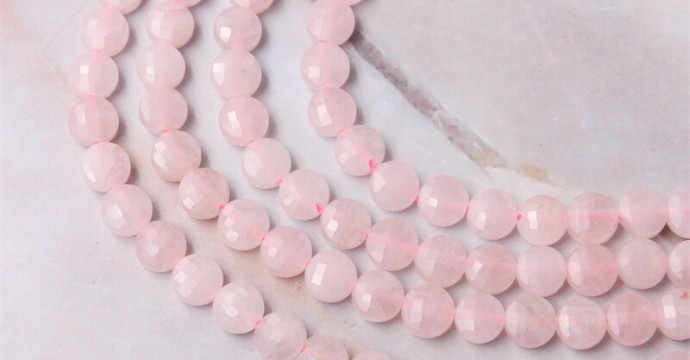 Rose quartz is considered a gentle and loving stone. It helps to release tension, as well as forgive others in order to find peace with oneself. A recognized wellness stone that can be placed inside your home or bedroom for friendly energy throughout the day. Love will also be rekindled here during meditations if you are feeling stressed about life right now. If rose quartz is combined with black tourmaline (support), then these energies intensify each other as they complement each other beautifully! Rose Quartz helps people feel safe and loved while giving off a calming essence that enhances dreams and thus having a restful sleep at night. Children who don't sleep well due to too much anxiety may find comfort in resting their heads on one of these stones.

Rose quartz is a type of anti-stress stone. It helps relieve the physical and mental effects of stress by stimulating circulation, detoxifying the body, improving sleep quality and helping to heal wounds faster than usual. Rose quartz also has preventive qualities as it can help with ulcers, hypertension, anxiety.

The significance of rose quartz is related to the heart. The powers of rose quartz are said to be strongest when it comes to matters of the heart, as its meaning shows. Stress resulting from strong or extreme love or sadness can be calmed after wearing a piece of jewelry made from this quartz on your body, especially around your neck!