RUBY: VIRTUES, COMPOSITION, ORIGIN, HISTORY AND PURIFICATION OF THE STONE

Ruby stone is a variety of corundum in the aluminum oxide family. Ruby belongs to the category of gemstones, which includes diamond, sapphire and emerald. Ruby is highly prized and can fetch high prices per carat.

History of the Ruby

Ruby is one of the most historically important colored stones. In fact, Ruby is mentioned four times in the Bible, in association with attributes such as beauty and wisdom.

In the ancient language of Sanskrit, the Ruby is called "ratnaraj", or "king of gems". Ancient Hindus believed that those who offered beautiful Rubies to the god Krishna could be reborn with higher social status, such as emperor.

Ruby has accumulated lots of legends over the centuries. In India, people believed that rubies allowed their owners to live in peace with their enemies. While in Burma, warriors who owned Rubies believed that it made them invincible in battle. However, it was not enough to just wear the gemstone, they had to insert them into their flesh and make them an integral part of their body.

The name Ruby comes from the Latin word "ruber", which means "red". The brilliant red color of the Ruby suggested an unquenchable flame in the stone, shining even through clothing.

The Ruby was one of the most sought after gems by European royalty and the upper classes. The stone became a symbol of royalty, and were used as ornaments to crowns or helmets. Many medieval Europeans wore rubies to guarantee health, wealth, wisdom and success in love. 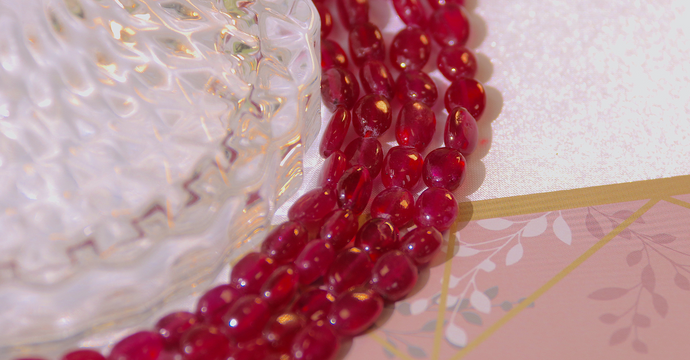 Composition and Origin of Ruby

The Ruby like Sapphire are part of the corundum family. In its purest form, corundum is colorless. It is the trace elements that are incorporated into the crystal structure of the mineral that cause variations in its color. Generally speaking, colored corundum is called sapphire, which can exist in blue, green, pink, yellow, purple hue etc. Only corundum with a pink to bright red color (flesh color) is called ruby (which can also be called red sapphire). Chromium is the element responsible for the red color of ruby, which can vary from orange-red to purplish red.

Ruby stone is formed in magmatic or metamorphic rocks. Its deposits can be found in India, Cambodia, China, Tanzania, Thailand, Afghanistan etc. The most famous rubies are from Myanmar, the Himalayas and northern Vietnam, which are generally formed in marble. They are found in irregularly distributed layers in the surrounding marble.

Rubies from basaltic rocks can have a higher iron content, which can make the rubies darker and less intense in color. A higher iron content in the chemical composition of a Ruby can also mask the red fluorescence, eliminating that extra burst of red color seen in Rubies set in marble.

The most sought-after Rubies are the "pigeon's blood", which have a remarkable red color and transparency, with a hint of blue.

On the Mohs scale, the hardness of ruby is 9, equal to Sapphire and Emerald. 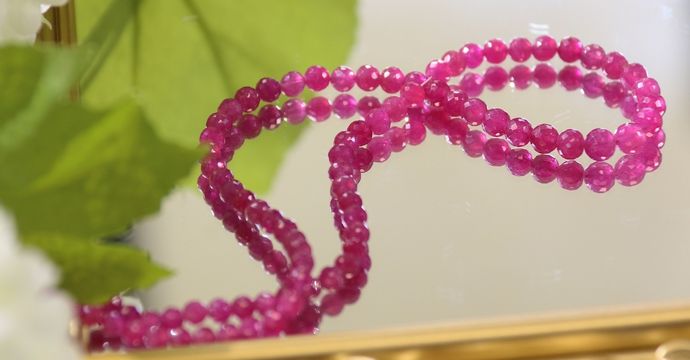 Many cultures cherished the Ruby for its resemblance to the redness of the blood that flowed through their veins, and believed that Ruby held the power of life

In lithotherapy, on the physical level, the ruby would have for benefits to strengthen the cardiovascular system. The stone would promote healing and better vitality to its wearer. Moreover, the stone is recommended for anxious and tired people.

On the emotional level, the ruby helps to promote positive emotions, passion and love. The stone would have properties to develop confidence and self-esteem, ideal for shy or introverted people. It also improves concentration and awareness.

Ruby is the birthstone of July, representing love and passion.

Purification of the Ruby

When your Ruby needs to be purified and recharged. In order to clean it, you can immerse it in demineralized water for a few hours, then wipe it with a soft cloth.

The desire to possess Ruby is as great today as it ever was. As a symbol of passion, love and strength, the Ruby is an ideal romantic gift. Consumers are drawn to this lush color because it also signifies wealth and success.