Amethyst is a variety of Quartz. The unique purplish color of Amethysts make them very popular stones. They were used for the design of majestic property (such as crowns). Amethyst can be worn in different ways to bring different virtues.

Amethyst is a fine stone of purple color. Its etymology comes from the Greek "methystos" which means "drunkenness", its prefix "a" determines the deprivation therefore its name means "sobriety". This name also comes from Greek mythology -  Amethystos, a chaste nymph, was coveted by the god of wine and celebration Dionysus. Who was then transformed into rock crystal by the goddess Artemis, to protect her from Dionysus; this one under the fury spilled his glass of wine on the crystal and became purple.

From this history, Amethyst has often been used for the creation of glass, to prevent drunkenness. According to the times and civilizations, Amethyst has several meanings; for Christians it is synonymous with purity and humility when Joseph offers Mary a ring set with Amethyst. It also symbolizes love during Valentine's Day and finally fidelity.

During the Renaissance, Leonardo da Vinci already used this stone for its virtues in lithotherapy, especially to dispel negative thoughts and improve his creativity.

It quickly became appreciated, its purplish color was used as a decorative stone by the Etruscans and Egyptians. Amethyst entered the fashion of the 18th century for the manufacture of clasps, brooches and beads.

Even today, because of its deep color and brilliance, Amethyst remains popular and is used for jewelry making and for its virtues in lithotherapy.

Origin and Composition of Amethyst

Amethyst is composed of silicon dioxide (SiO2), it is part of the Quartz variety and has a density of 2.65.

It is found in basaltic rocks and/or in plutonic rocks. Amethyst can be translucent or opaque, its color is determined by the temperature of formation; this one remains purplish only until 250°C. Around 500°C, Amethyst becomes lemon yellow (Heated Citrine). The intensity and coloring may vary depending on where it was mined, as well as its iron and manganese content.

Origin of the Amethyst

The hardness of Amethyst is 7 on the Mohs scale. 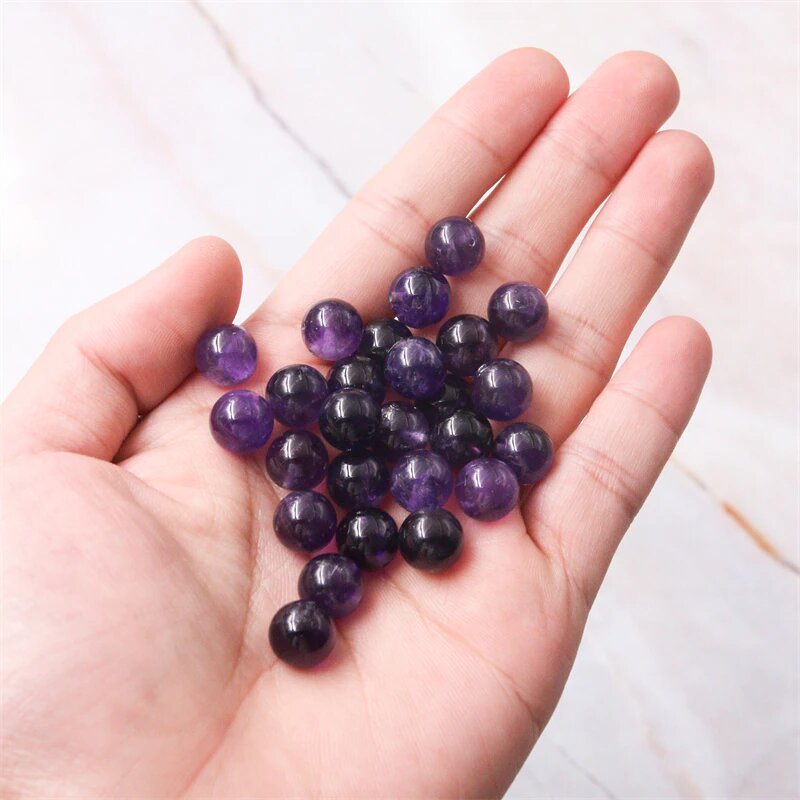 Virtues and Meaning of the Amethyst

Amethyst is considered as a stone of humility and wisdom.

It is often used in lithotherapy, for its virtues against stress or pressure. It promotes calm and serenity.

From a physical point of view, Amethyst can help relieve muscle pain, headaches and bring better physical and mental stability. In addition, it is considered the ideal stone for women, as Amethyst can enhance hormone production and promote sleep.

From a psychic point of view, this stone helps not only meditation but also concentration and spiritual elevation. Amethyst can calm anger, reduce fear, anxiety and emotions of sadness.

It is often used as a support for alcoholism and addictions (drug addiction).

Note that lithotherapy does not replace medical treatment or medical expertise.

Meaning of the stone of Amethyst

Amethyst symbolizes sincerity and spirituality; considered in the past as a magical stone, it was used as a talisman against drunkenness and as a good luck charm.

Closely linked to the coronal chakra, it enhances benevolence and spirituality. Amethyst can be correlated with the third eye chakra to stimulate creativity, imagination and clarity of mind.

Astrological signs linked to Amethyst are Sagittarius, Capricorn, Aquarius, Pisces and Virgo Amethyst can be associated with the birth month of February. It is also the stone for 6 and 17 year marriages.

Care, Purification and Recharging of Amethyst

To maintain your Amethyst stones, it is possible to clean it with distilled water (not salted). Purification is not necessarily necessary for Amethyst.

Recharge your Amethyst with a heap of quartz next to it or thanks to the moon rays.