Unakite: virtues, composition, history, origin and purification of the stone

Unakite was discovered in 1874, in the southern United States. It is also known as epidote, from the Greek word "epidosis" which means "complement". Unakite was discovered by Rene Just Haüy in 1801 and got its name from it. Today, it is very popular to make jewelry with unakite as a cuff or bracelet.

Unakite is a member of the granite group and can be found in metamorphic, hydrothermal and migmatitic rocks. Its crystal system is monoclastic. Unakite is a fine stone composed of aluminum, iron and calcium silicate. Inclusions of epidote, orthoclase and quartz give it a green or pink tone while its monoclinic crystal system reveals irregularly shaped crystals.

Rated 6 to 7 on the Mohs scale, this stone can be used in ornamentation or be one of the most remarkable gems.

It has been found in hydrothermal rocks from metasomatic and metamorphic deposits in the eastern United States at high elevations, for example in the Blue Ridge Mountains, but also on the shores of Lake Superior on the North American side, in Sierra Leone (West Africa), Brazil (South America), China and South Africa.

It exists in different colors but it is mostly green or pink which makes it possible to see the crystals in an irregular way like "rose quartz". If this stone has high quality minerals, it will be called fine stone on its certificate saying that these gems are suitable for polishing into jewelry. 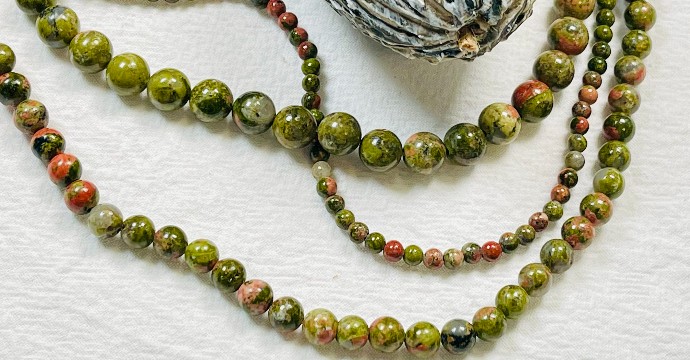 Unakite is a stone that helps people by helping them to overcome their past, find themselves, and ultimately show compassion. It is very rare to come across an unpolished unakite gemstone, but it is more common to see them as pendants. Unpolished unakite can also help bones when they are predominantly beige in color. Unpolished stones will most accurately respond to liver, bowel or bile duct problems when they have been stained yellow-green on top with red coloration near the surface lines, as if engulfed in flames.

With the help of unakite, people can cultivate and deepen their introspection and self-knowledge. This will give them all the wisdom they need to moderate judgments or thoughts in order to achieve inner peace or resolve a problem that might affect them emotionally. In addition, this stone aids in meditation as it is classified as a psychic stone that eliminates electromagnetic waves, so you can travel to your past lives to eliminate negative feelings such as anger.

How to cleanse stones?

There are three methods of purifying stones when they come into your hands and exhaust their energies: Purification with distilled or demineralized water, sea salt, or by burying in the ground. If you practice meditation regularly, it may be helpful to use the fumigation recommended for light purification and energy cleansing.