Turquoise: Virtues, composition, origin, history and purification of the stone

Origin, history and benefits of Turquoise

Turquoise is a light to dark blue-green mineral commonly found in mines and objects in the New World. It has been used for thousands of years as an ornamental stone and as a traditional material for making jewelry, masks, utensils and other objects. Turquoise is most often found in secondary deposits within copper-bearing strata, where it forms by the alteration of pre-existing minerals. However, primary deposits of natural turquoise are known from Iran, Turkey, and Andean sites in Bolivia, Chile, and Peru. These different sources have resulted in variations in the chemical composition and visual appearance of turquoise found in these locations. In addition, there are many lesser known properties that make each variety of turquoise unique. It has been prized for its brilliant hues and origin for thousands of years by cultures around the world. As with most gemstones, the history of turquoise is rich and varied.

Turquoise has been mined and used by humans for thousands of years. The oldest known turquoise artifact is a carved bracelet dating back to about 6000 BC. Because of its high durability and resistance to corrosion, turquoise has been used for ornamental and ceremonial purposes in many parts of the world. Archaeologists have found turquoise beads in the remains of many cultures and civilizations, including the ancient Native American cultures of the Southwest, the ancient Mesoamericans and the ancient Egyptians. In Southwestern Native American cultures, turquoise has been valued for thousands of years for its blue color and its association with the sky, water and earth. It is considered a "stone of the heavens", a gift from the Creator that connects humans to the universe. This is why it is commonly found in Native American jewelry, masks and other decorative objects.

The word "Turquoise" comes from an old French word "torchus" which means "Turkish". Indeed, Europeans of the 16th century thought that the gemstone came from Turkey, because it was in transit there. In fact, it came from Persia, now called Iran. The earliest known reference to this blue-green stone appears in the Epic of Gilgamesh, one of the oldest pieces of human literature discovered to date. 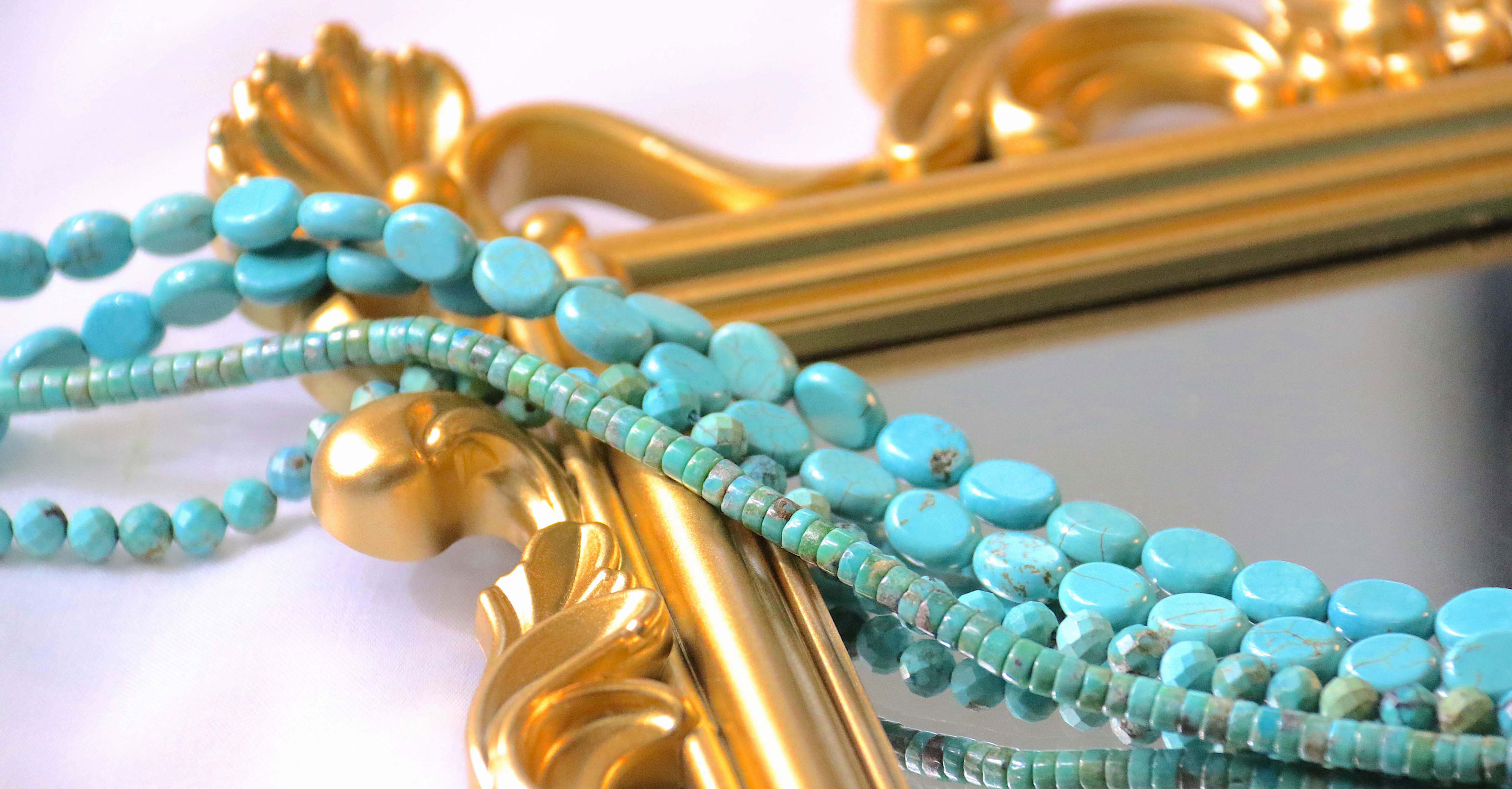 Composition and Origin of Turquoise

If the color of the Turquoise can vary from light blue to dark green, its chemical composition remains practically the same. It is a hydrated copper phosphate whose chemical composition is CuA16(PO4)4(OH)8.4H2O. Turquoise is a secondary copper mineral that forms by oxidation and hydration of copper minerals in adjacent rocks. Turquoise is found in association with other copper minerals such as chrysocolla, malachite and azurite. Because of the way turquoise is formed and its high level of hydration, it is a porous stone that absorbs water from its environment. Turquoise stone can be found in a variety of different locations and has varying chemical compositions. The process of creating Turquoise involves the alteration of pre-existing minerals in the presence of water. This process, known as hydrothermal alteration, forms turquoise from minerals such as carbonates, schists and cherts.

The hardness of Turquoise is between 5-6 on the Mohs scale.

The Turquoise is considered in lithotherapy as a purifying and calming stone. It calms anger and develops empathy, and absorbs bad energy and converts it into positive energy.

Overall, Turquoise is one of the oldest gemstones, dating back thousands of years. It has been mined and treasured by people of many cultures throughout that time. While turquoise has many uses, it is best known for being used as a symbol of eternal youth.

How to maintain your Turquoise?

When your Turquoise loses its energy, you can immerse it in demineralized water for a few hours, then wipe it with a soft cloth to clean it. Alternatively, you can bury it in the ground for a few days so that it can recharge.

Note that the Turquoise at the end of life becomes dull and can crack.