Aquamarine: Origin, History, Composition, Virtues and Purification of the stone

Did you know that Aquamarine is a member of the beryl family like Emerald.

Aquamarine, which takes its name from the Latin word "Aqua marina", means "sea water". It is a stone that can be transparent, translucent or opaque and usually comes in shades of blue to green tones reminiscent of the sea. Its appearance is  similar to topaz. It was used to protect sailors, as it was said to be effective in calming the waves and preventing motion sickness. Because of its hardness and durability, Aquamarine was often used in the engraving process of ancient cultures, known as intaglio, as each detail remained sharp for long periods of time without cracking or breaking over time, due to its ability to resist corrosion from exposure to salt water environments such as streams near oceans or seaside cliffs along the coast, where it is primarily mined. A number of works were created with images depicting various Greek gods, such as Zeus himself, who wore an Aquamarine, while others depicted famous historical figures, such as Alexander the Great, who permanently wore a beautiful ring made of these rare stones. 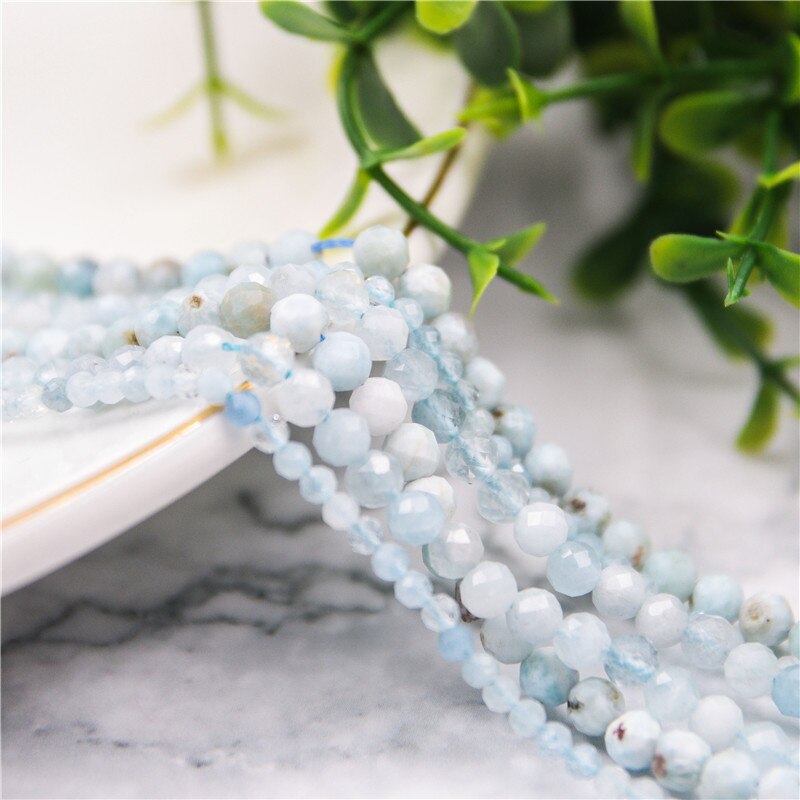 Origins and composition of Aquamarine

The mineral Aquamarine is composed of aluminum silicate and beryllium. It is found in the earth's crust, in volcanic rocks. The color of this stone ranges from transparent azure in its purest form to shades that range from lagoon blue to emerald green, depending on the amount of oxygen oxidized by the ferric elements present during the formation of the crystal. The values of these stones vary according to size classifications like diamonds or gemstones like rubies or sapphires.

Aquamarine can be found in Brazil, Madagascar, and Pakistan. There are also deposits in France.

The hardness of aquamarine is between 7.5 and 8 on the Mohs scale.

Virtues and meaning of Aquamarine

Aquamarine has been used in lithotherapy, a type of healing treatment, since ancient times by many different cultures. Its health benefits are not only physical, but also mental and cerebral :
aquamarine is a communication gemstone, giving the individual additional sensitivity and expressiveness, as well as the ability to better communicate emotions. It is associated with the 5th chakra, i.e. the throat chakra (Vishuddha) and also with the heart chakra (4th chakra). People who wear it are particularly attracted to artistic fields such as painting or sculpture.

It has calming properties, bringing peace, calm and serenity while stimulating the mind of those who wear it as a necklace or bracelet during exams. It is therefore very popular with students who have to take oral exams, as it prevents them from stressing and gives them courage.

Aquamarine is often associated with spiritual growth. Its soothing and comforting energy will help you feel love, compassion and tenderness. Usually the heart chakra closes after experiencing the grief of a breakup or emotional trauma. In reality, it never closes permanently, and can no longer receive loving emotions such as joy or trust! Wearing Aquamarine can help open this specific heart chakra for deeper work in this area of your life, where it can sometimes be closed due to past hurts or difficulties. In love, this stone also brings loyalty.

Finally, Aquamarine is the birthstone for March and Pisces. It is also the stone for the 19th wedding anniversary.

To take care of your stone, you can clean it and polish it with a soft cloth.

There are three methods for purifying stones when they come into your hands and deplete their energies : Purification with distilled or demineralized water, sea salt, or by burying them in the ground. If you practice meditation regularly, it may be helpful to use the recommended fumigation for light purification and energy cleansing.

After purifying your stone, you can recharge it by placing it on a quartz cluster all day in the presence of light. Or let it charge under the sunlight for several hours.